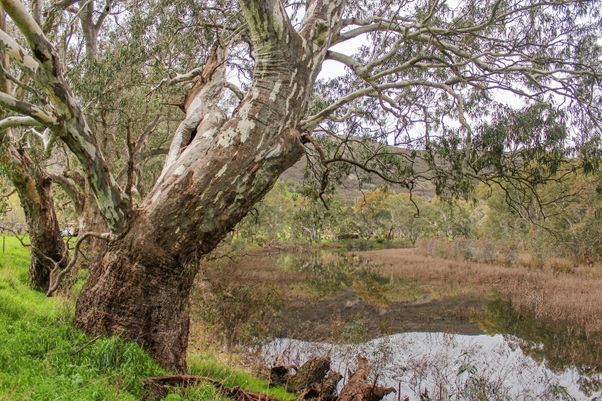 Taungurung women danced to welcome the first delivery of water for the environment to the sacred Horseshoe Lagoon, outside Seymour.

In September 2019 Taungurung Traditional Owners and local landowners welcomed representatives of Goulburn Broken CMA, Parks Victoria, and the VEWH to a celebration to mark the historic occasion.

The event was the culmination of work by the Taungurung water knowledge group Baan Ganalina (Guardians of Water), who have been working closely with Goulburn Broken CMA and other partners to bring water back to the lagoon and are delighted to see first-hand the birds and other animals that have already started to return to the site.

Taungurung elder Aunty Patsy Smith says the watering of the lagoon is especially significant because of the site’s cultural significance.

“This is a women’s place, and for me to bring my grandchildren to sing and create ceremony, it’s like revival for our ancestors. It just feels as though it’s brimming with life, now,” she said.

Taungurung Traditional Owners are not the only members of the community who are happy to see the changes that have taken place.

Local landholders such as Greg Smith have been campaigning for several years to have a small amount of water for the environment delivered to the site, which under natural conditions would have been inundated six years out of ten.

“It hasn’t been full since 2012. Thistles and other vegetation have grown up all around the edge of the lagoon because there hasn’t been a watering here, so if we had waited much longer it would have been too late,” Greg said.

Simon Casanelia from Goulburn Broken CMA agrees that it was a really important time to add water to the wetland.

“We were seeing weeds start to dominate the area, and if a billabong like this is dry for too many years the seeds of native species start to die – so they won’t come back even if you get water in the lagoon,” he said.

“Horseshoe Lagoon is a significant habitat for rare and threatened species such as the pied cormorant, azure kingfisher and eastern great egret, along with a wide variety of other plants and animals that depend on the water for survival, so we were really excited when we heard that Horseshoe Lagoon is also really important to the Taungurung and to local landholders.”

Simon is excited by the immediate impact that the water is having.

“The results so far are even better than we expected – already today we’ve spotted ducks, ibis and kingfishers, and we’re expecting to see many more species over the next few months. It’s not just wetland species who benefit. We’ve also encountered kangaroos, wallabies and an echidna which have been attracted by the new water in the lagoon. Adding water to a billabong – especially in dry times like we’re experiencing at the moment – is really important because it becomes a refuge for animals throughout the entire region. The new plant growth and the insects that emerge from the water become a food source for all sorts of woodland species. It’s like a honeypot,” he said.

The benefits of these partnerships were summed up by VEWH Commissioner Rueben Berg. At the event Rueben spoke about the cultural significance and environmental benefits of the delivery of water for the environment to the site.

“Horseshoe Lagoon is a great example of where we can attain shared benefits from water for the environment. This is a fantastic spot where there are really important environmental elements we want to be taking care of with our water, and there’s also powerful cultural connections to this place,” he said.

“It’s also a fantastic demonstration of what can be achieved when Traditional Owners, government agencies and local landowners work together to protect something they all agree is important.”

You can watch a video of the celebration on Goulburn Broken CMA’s YouTube channel.